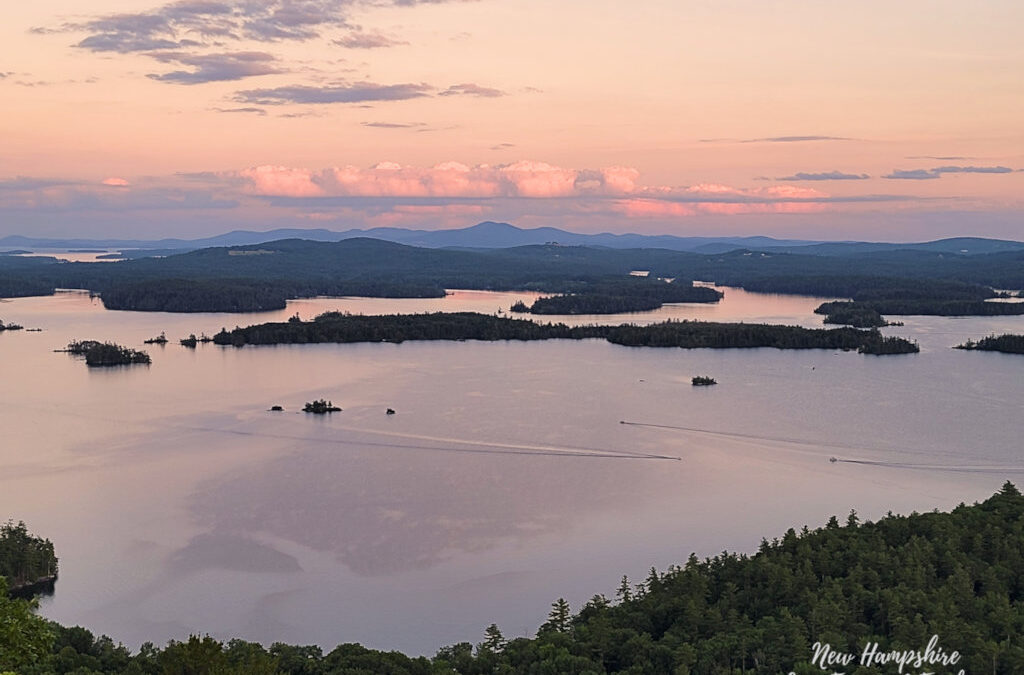 Squam Lake is a place you won’t soon forget once you have had the chance to experience it. I hope you get to explore this gem tucked away in New Hampshire’s Lakes Region. If you haven’t, hopefully, this post gets your curiosity percolating and you add it to your “places to explore in New Hampshire” list!

At 6,765 acres, Big Squam Lake will take more than one trip to explore fully, but it is worth the experience even in small bites. “Big Squam” is connected to “Little Squam” by a short channel. White Oak Pond rounds out the three bodies of water which are all interconnected. Squam boasts 35 named islands, of which, Moon Island and Bowman Island provide public access. There are a number of access points to the lake, including the main boat launch at the channel and the Squam Lakes Association. SLA provides a free boat launch and parking to non-members for a modest fee of $5.

Our rental was located on Grapevine Cove Road in Holderness. Pipers Cove is a sweet location that allowed us quick access to the water, sunrise views, and even some early morning wildlife! Squam is the setting for the classic film, “On Golden Pond“, starring Henry Fonda, Jane Fonda, and Katharine Hepburn. It is a great story about aging and relationships and can be viewed on YouTube. 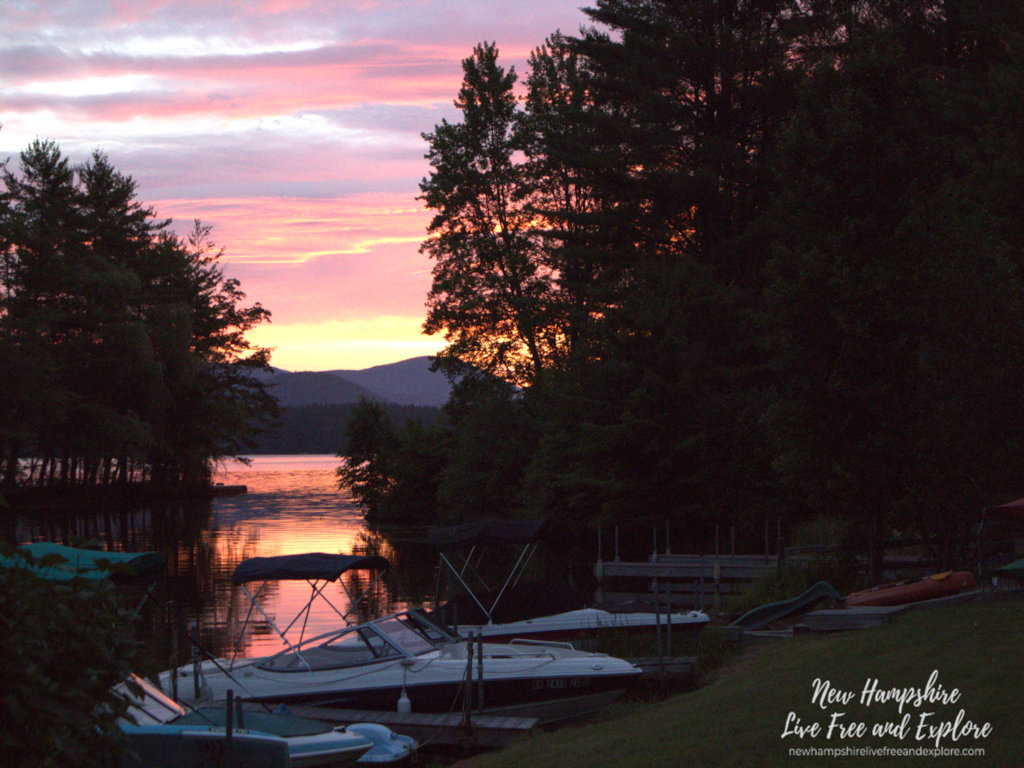 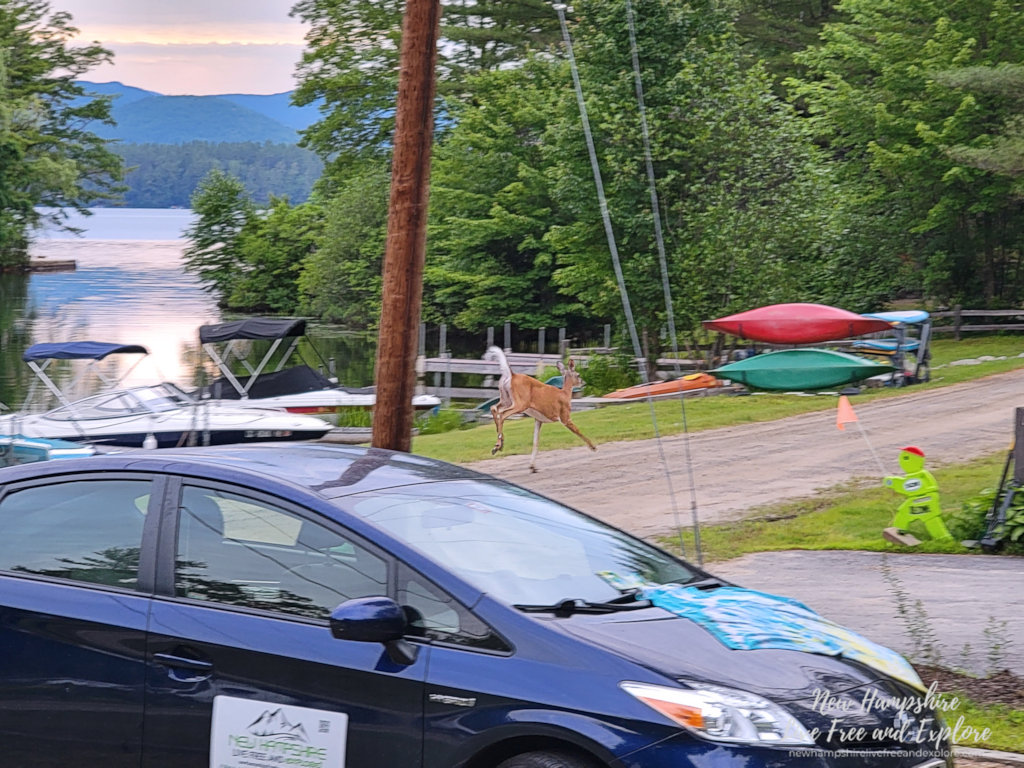 You can’t spend time on Squam Lake and not be inspired by the incredible mountain ranges that surround the lake. Mount Chocorua, Red Hill, West & East Rattlesnake Mountains, and others within the Sandwich/Squam ranges, all make for amazing views.

We opted for a sunset hike up West Rattlesnake after a day on the water. You can see the exposed granite from the lake and it makes a great spot to get a birds-eye view of the lake and islands. I’ll be doing a separate post on the hike soon. 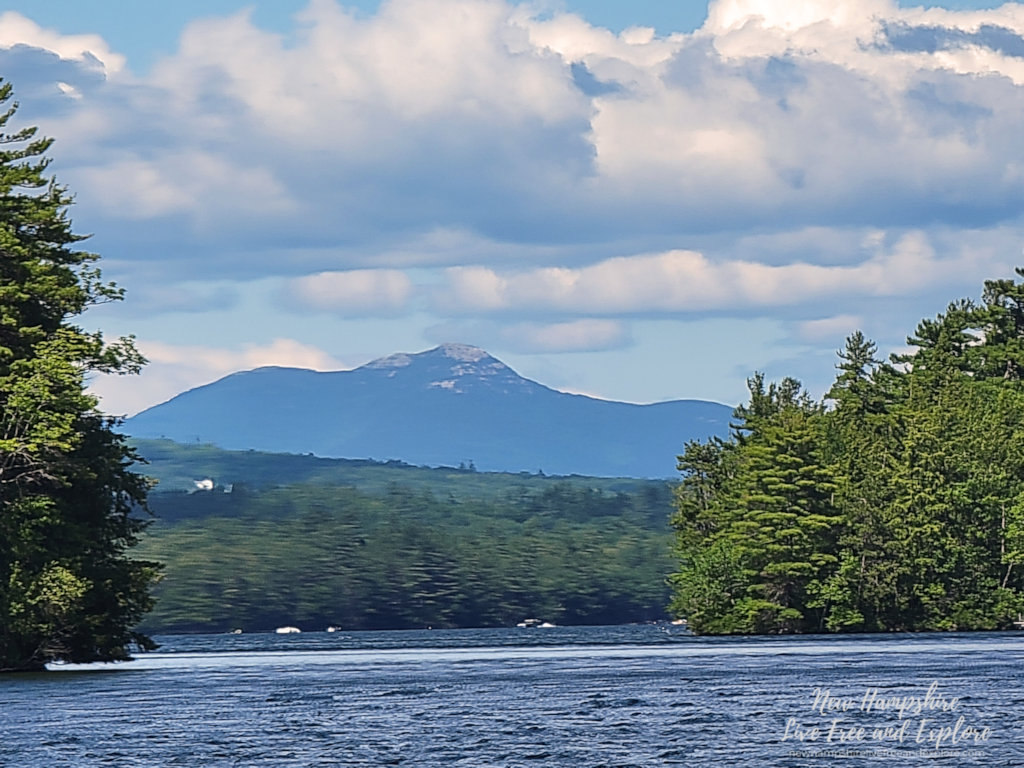 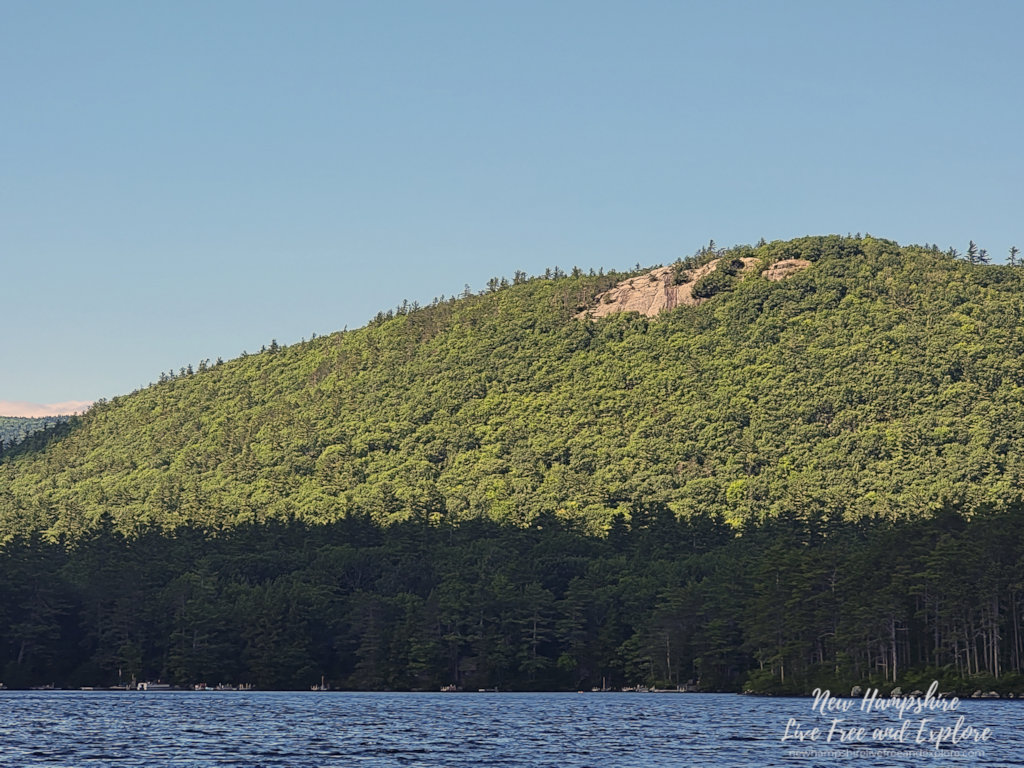 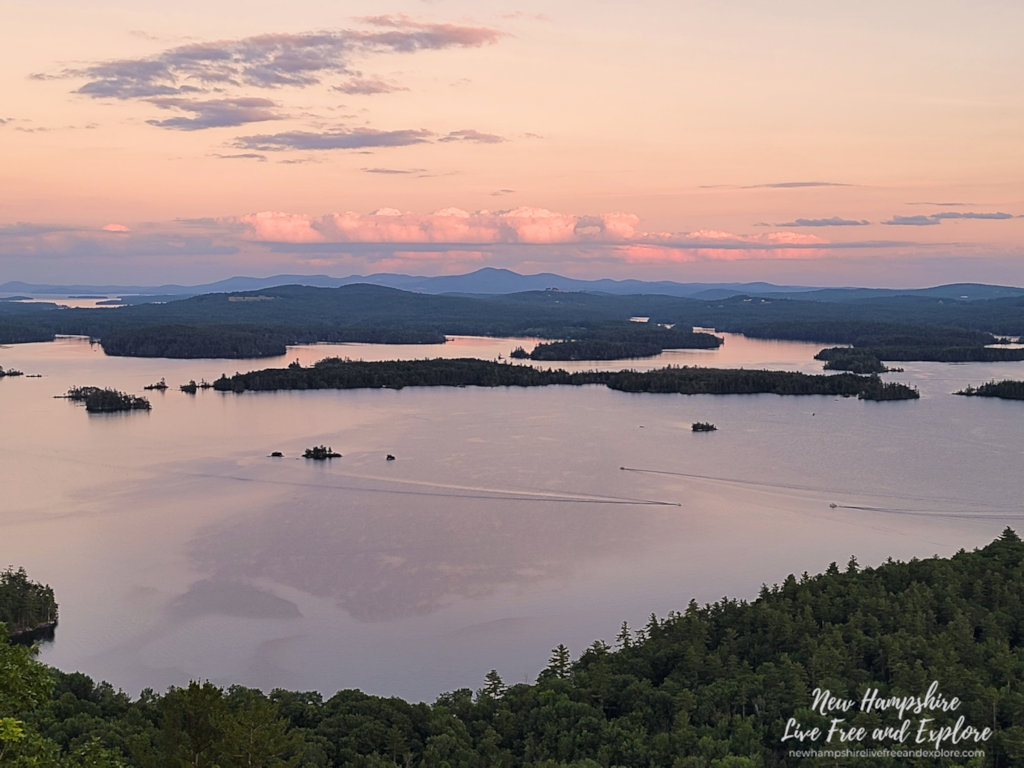 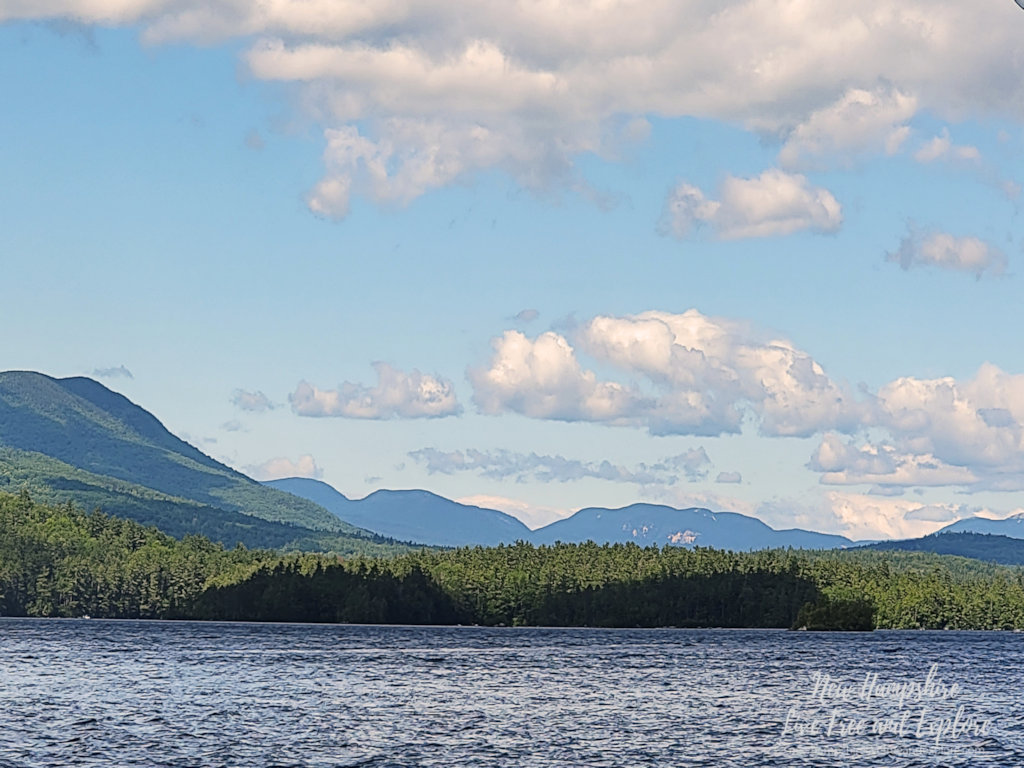 Squam’s 35-named islands are a big part of the adventurous feel of the lake. I received “The Islands of Squam Lake” by Ron Guilmette as a Father’s Day gift just before our scheduled vacation. It is a great mix of history, land pics, aerial pics, and the story of his quest to visit and catalog each island.  He also has a similar book from his adventures on Lake Winnipesaukee titled “The Islands of Winnipesaukee.” 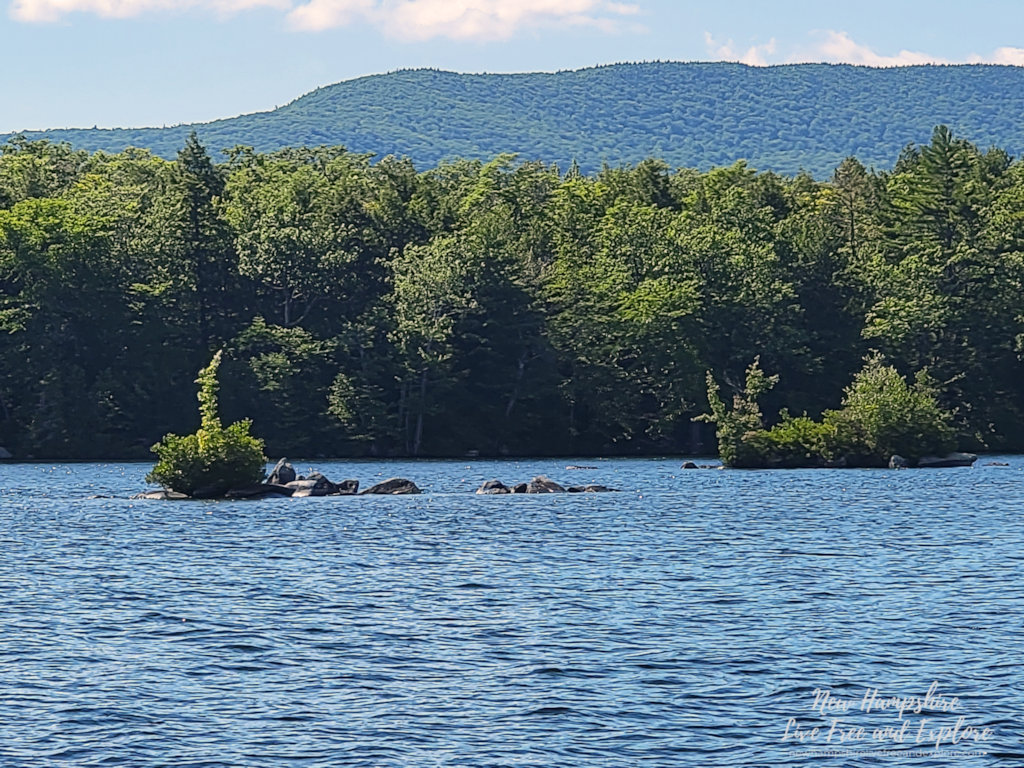 We spent time relaxing on Moon Island and found this memorial marking some of the history that is behind public access to it.

Squam Lakes Association is a non-profit founded in 1904 that works to preserve the watershed surrounding the lakes. Years of logging had taken their toll on the surrounding countryside and the water quality of the lakes. Landowners banded together to reverse those effects and protect the lakes for future generations. 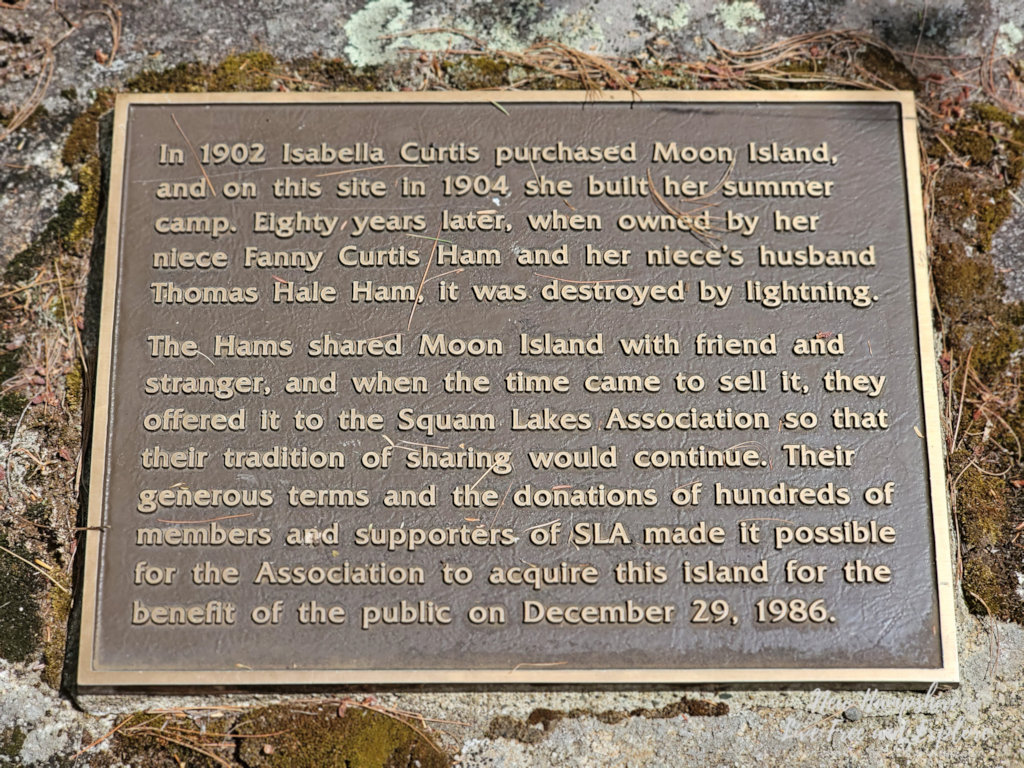 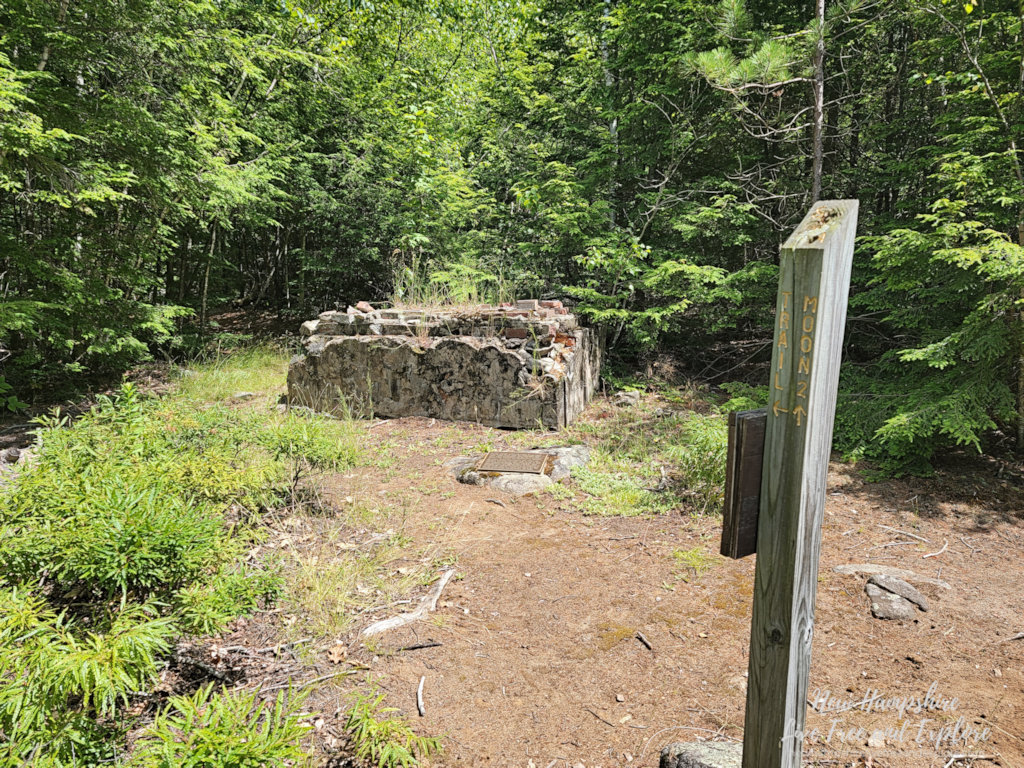 If you enjoy birdwatching and wildlife, you will find plenty to keep you snapping pictures at Squam. The lake is home to a diverse variety of wildlife. “On Golden Pond” made Loons a main focal point for the lake but you can observe eagles, blue herons, cormorants, ducks, geese, and more. 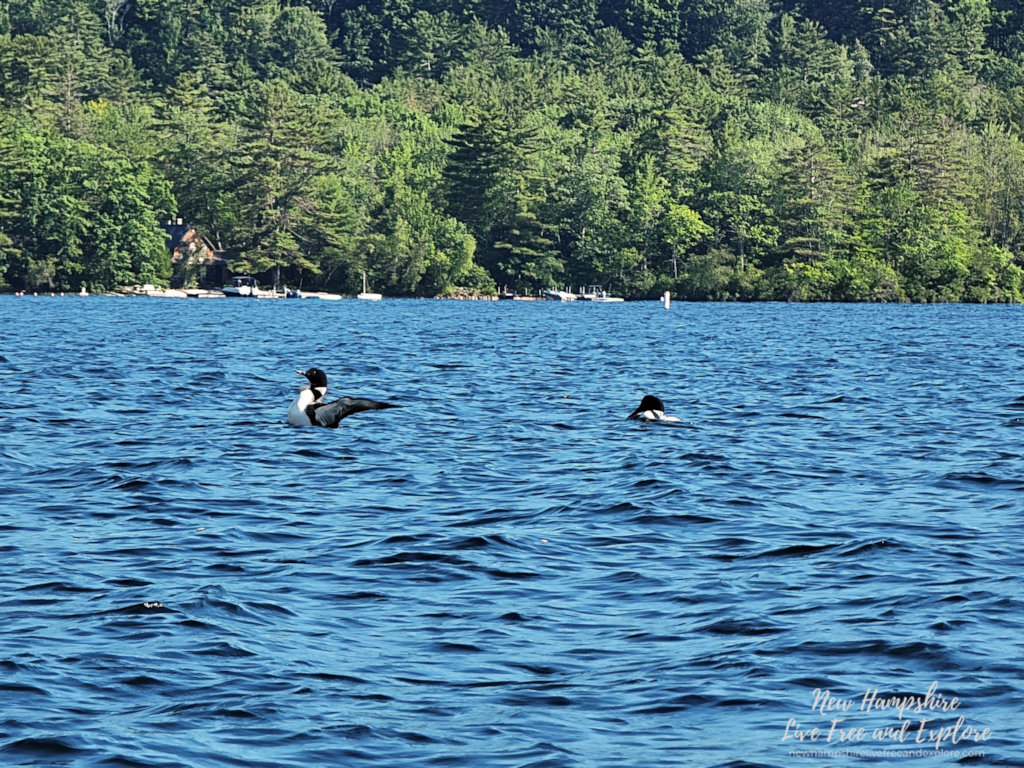 We opted to learn more about the lake, mountains, and wildlife by scheduling a trip aboard one of the Squam Lake Cruise boats. Captain Dave kept things fun and interesting.

Be sure to watch the video to observe the juvenile eagle taking flight. Captain Dave and the Science Center crew had been keeping a close eye on it for a while and were expecting it to take flight any day.

I can’t guarantee 100% that it was its first flight, but Captain Dave said it had been “helicoptering” (pumping its wings) for a few days in preparation so there is a good chance it might have been! A big cheer went up on the boat in any case. 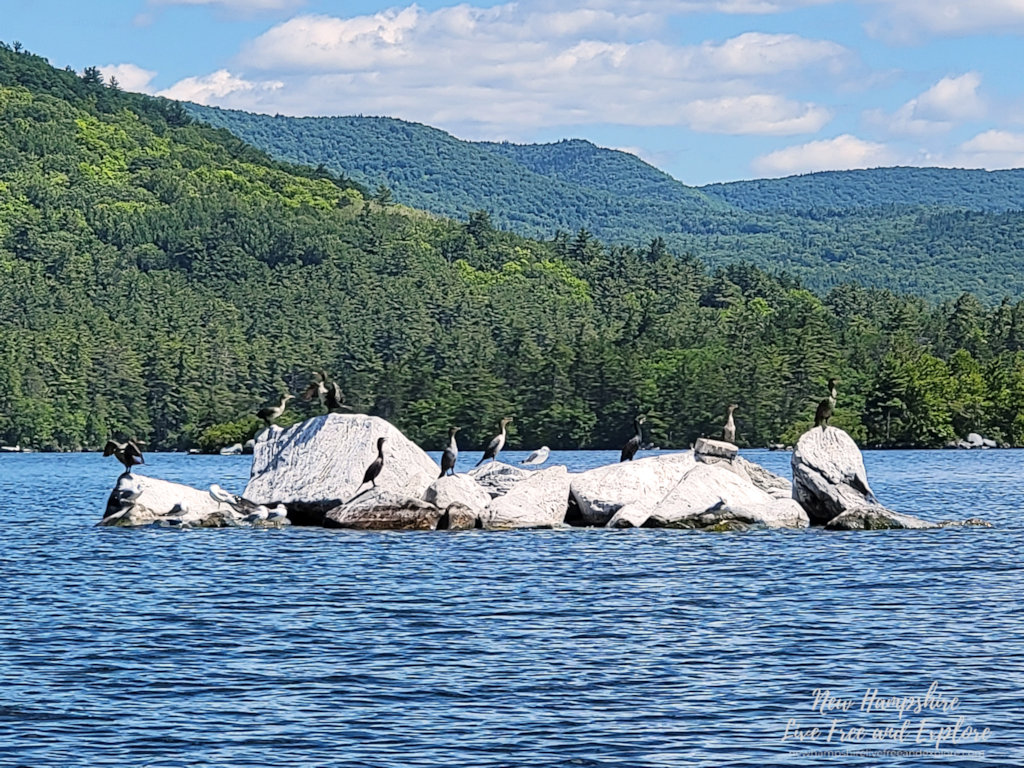 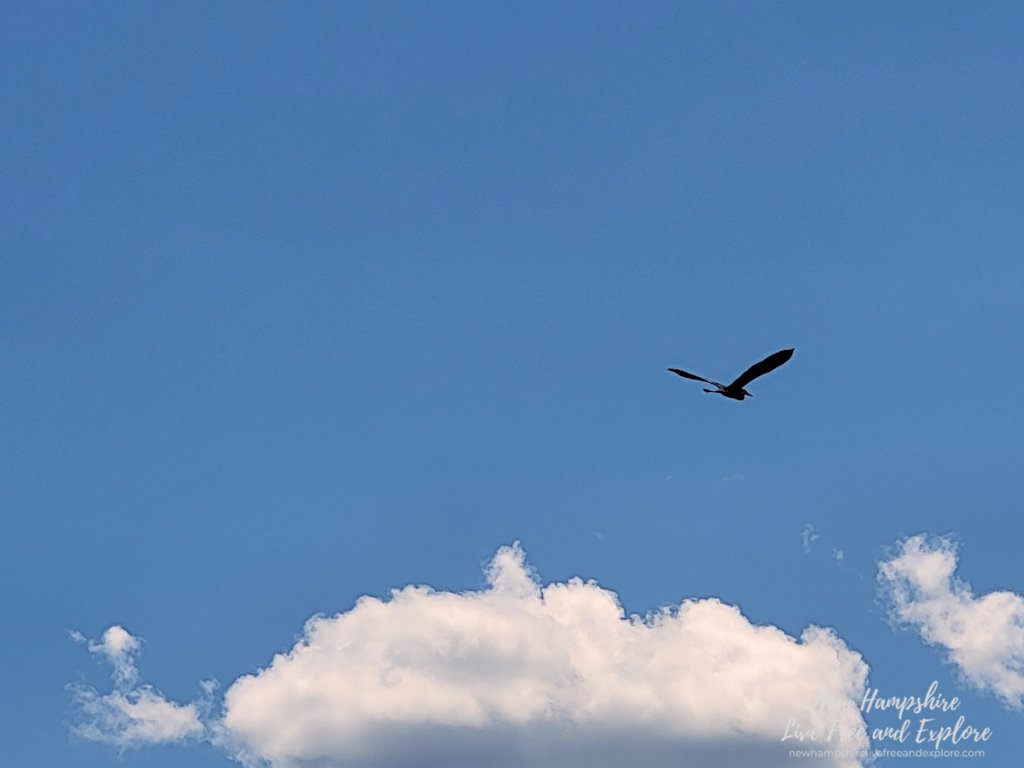 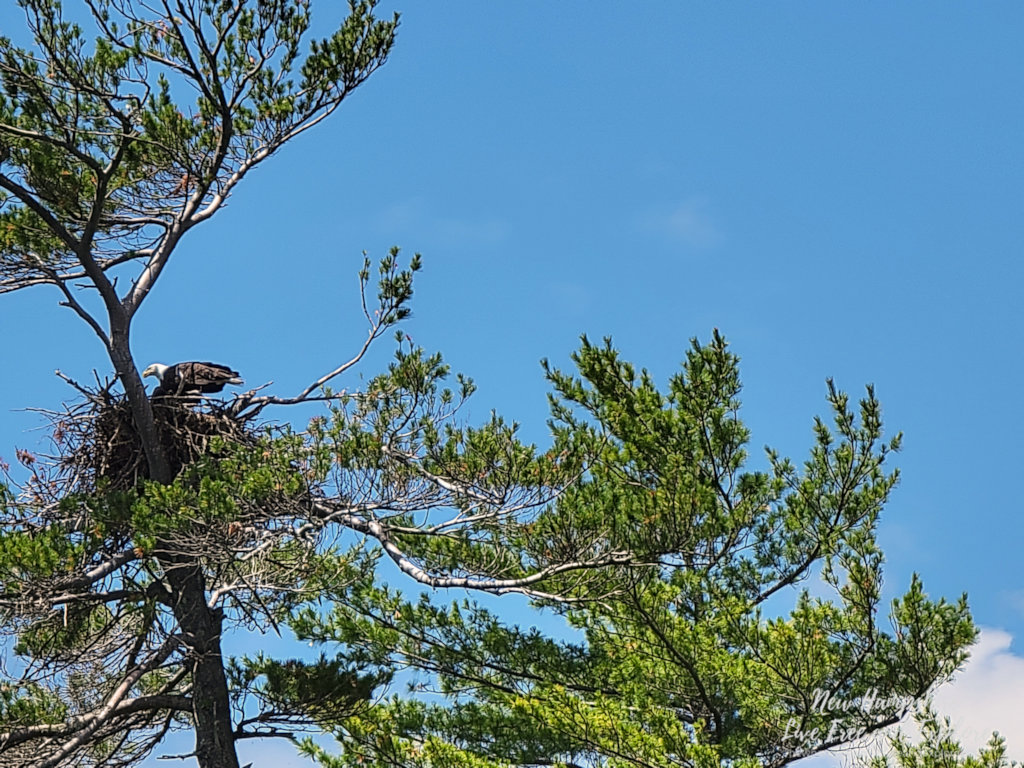 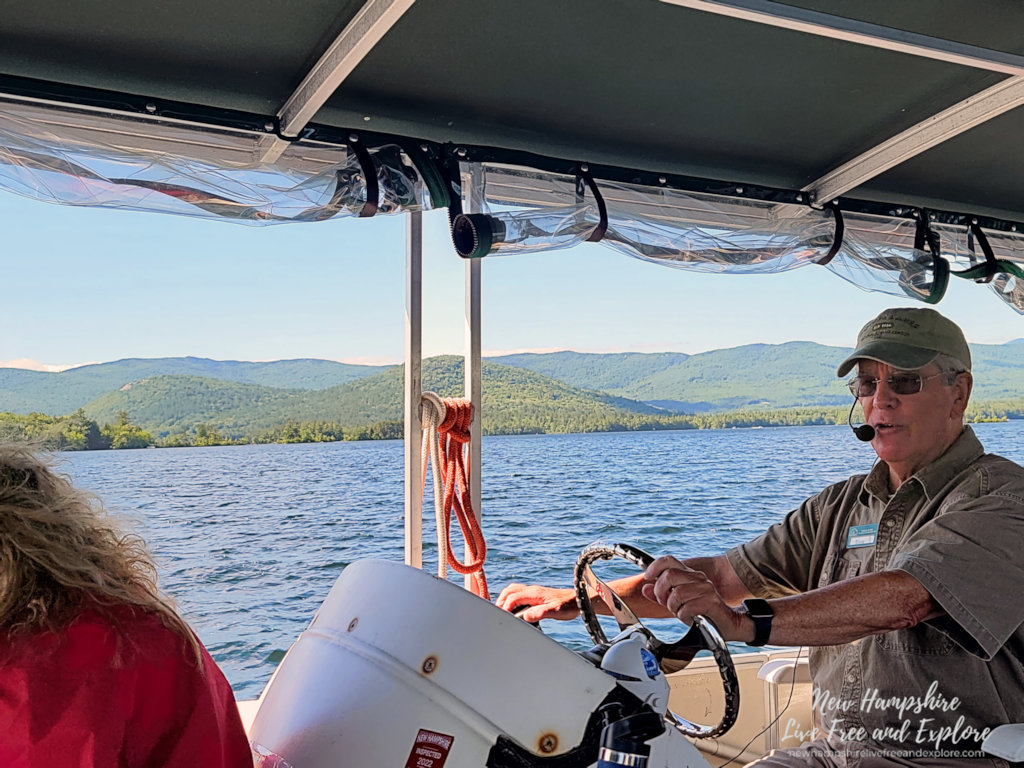 If you are a fisherman, there is plenty to love about Squam Lake. We were able to do some creative catch-and-release videos that added a fun aspect to this post’s video.

Other than a few trout at the beginning of the season, we tend to always let our fish go. The NH Fish and Game bathymetry maps are a great place to get the lay of the state’s lakes and ponds and also research the fish species within them.

Big Squam is home to landlocked salmon, lake trout, smallmouth bass, rainbow trout, and eight other species. The average depth is 24 feet and the max depth is listed at 99 feet. 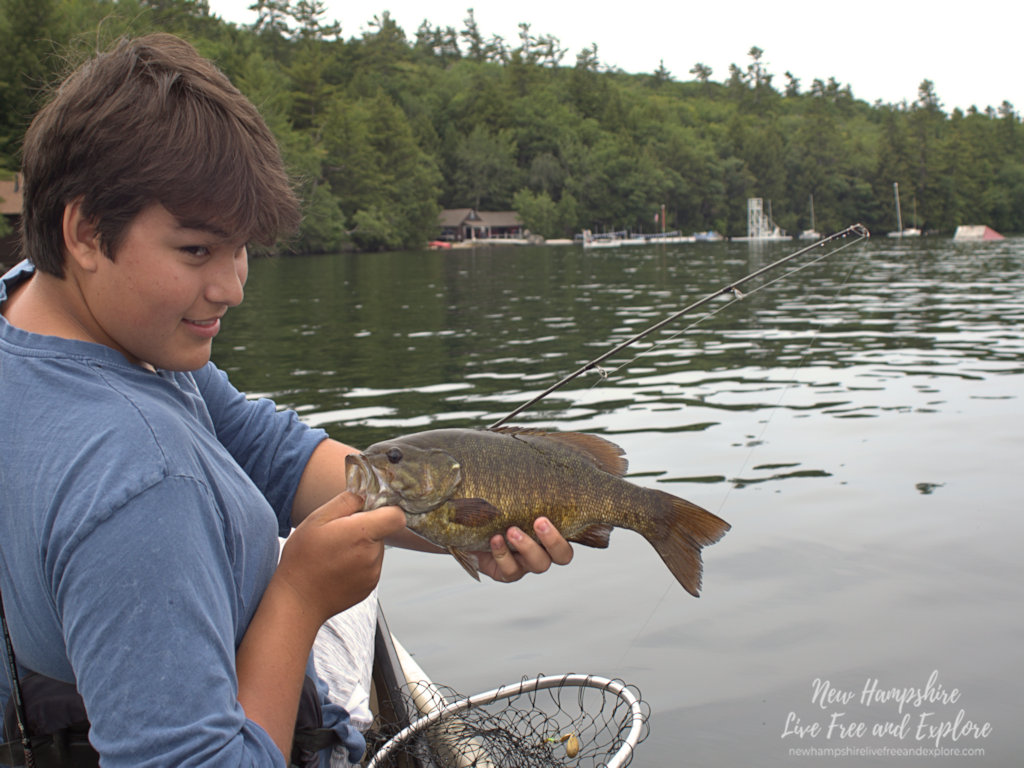 There is no shortage of things to do in New Hampshire’s Lakes Region and visiting Big Squam should be one of them! If you enjoyed this post, feel free to leave a comment below.

Check out more of New Hampshire’s beautiful Lakes Region with my post on Weirs Beach in Laconia.