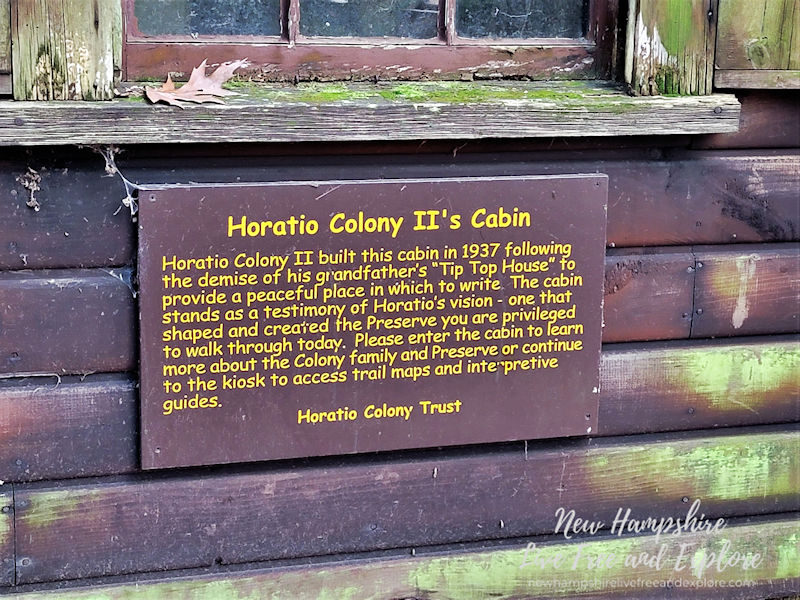 Welcome to this short post on a spur of the moment hike at Horatio Colony Preserve on the outskirts of beautiful Keene, New Hampshire! This was a quick change of plans from our original hike planned at Mount Wantastiquet. The sun would set before long so Wantastiquet would have to wait for another post.

I had hiked this area a number of years back with my Geology class at Franklin Pierce’s Continuing Education campus in Keene. I was looking forward to tackling it again with fresh eyes for this post. 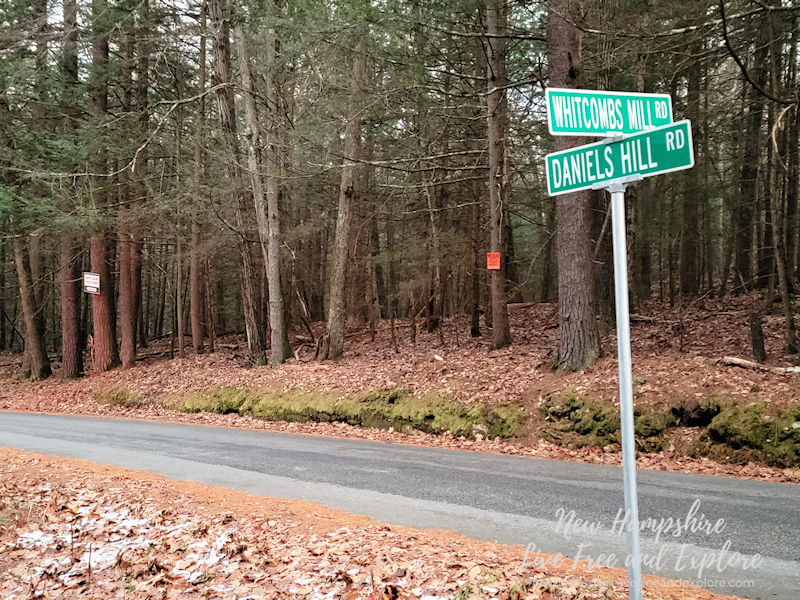 Horatio Colony Preserve is easy to get to from Route 9. Travelling East, take Whitcombs Mill Rd on the right and then turn left at the sign for Daniels Hill Rd. You will find the entrance just down the road on the right, it is well marked. 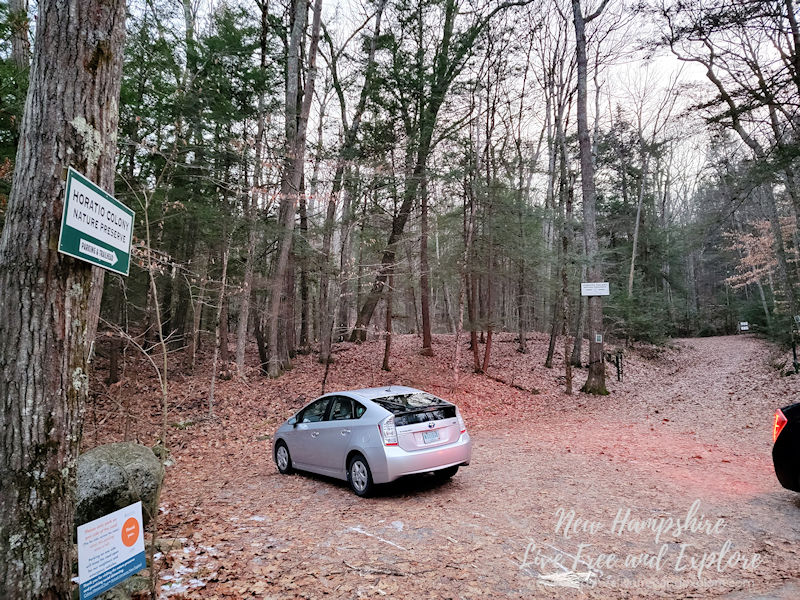 Horatio Colony II was a member of the family known for founding the Faulkner and Colony Woolen Mill in 1815. The Mill was once the longest-running family-owned textile mill in all of the United States. The brick smokestack is still a prominent landmark in Keene with the F&C still visible high above the surrounding landscape. The Mill had been converted to a beautiful shopping mall at one point. It has since been converted to apartments.

Horatio Colony II followed in his family’s footsteps running the mill. He also was known for his passion for writing plays and books. The Horatio Colony Museum on Main street in downtown Keene is a tribute to the family and the preserve. The Cheshire Historical Society is a stone’s throw away and I can highly recommend a stop in there as well. 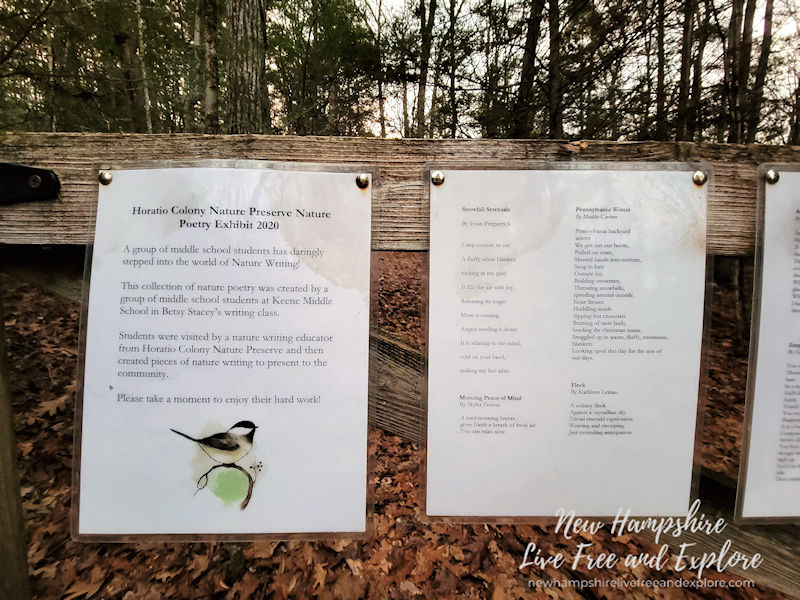 The trail system is very well marked and offers a variety of options depending on what you are up for. We opted for the “Red Diamond” trail since we were a little pressed to fit our hike in before dark.

A short distance from the main gate is the cabin built by Horatio Colony II where he would come to write. Just beyond that is the trail map. 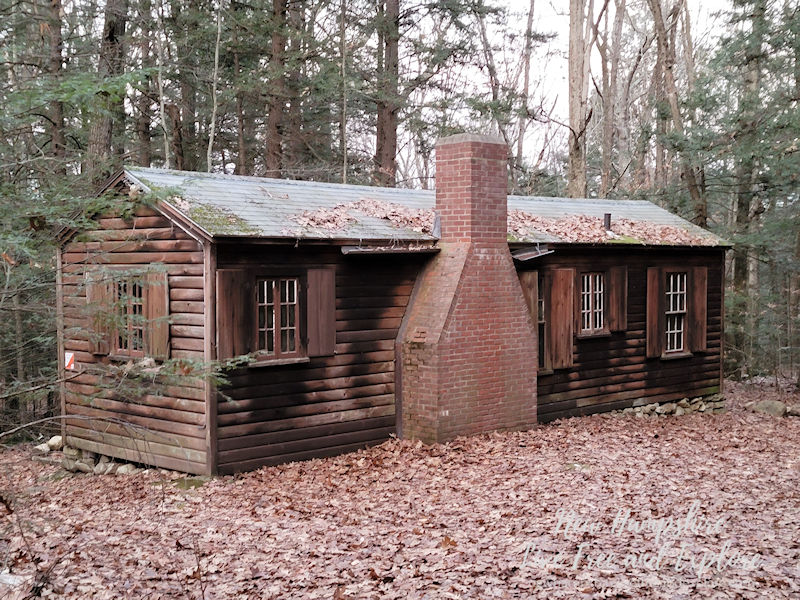 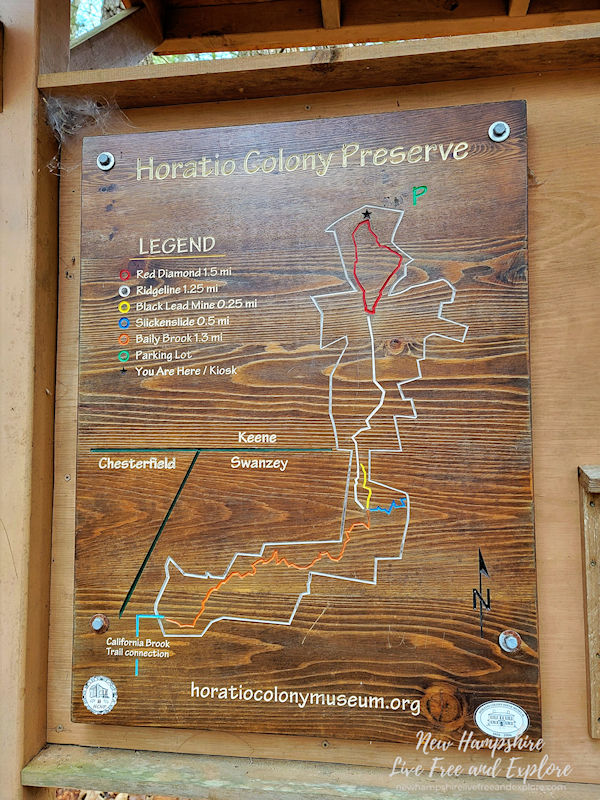 The first half of the hike up to the ridge took us about 20-30 minutes and wasn’t too difficult. The red diamond markers were easy to follow. 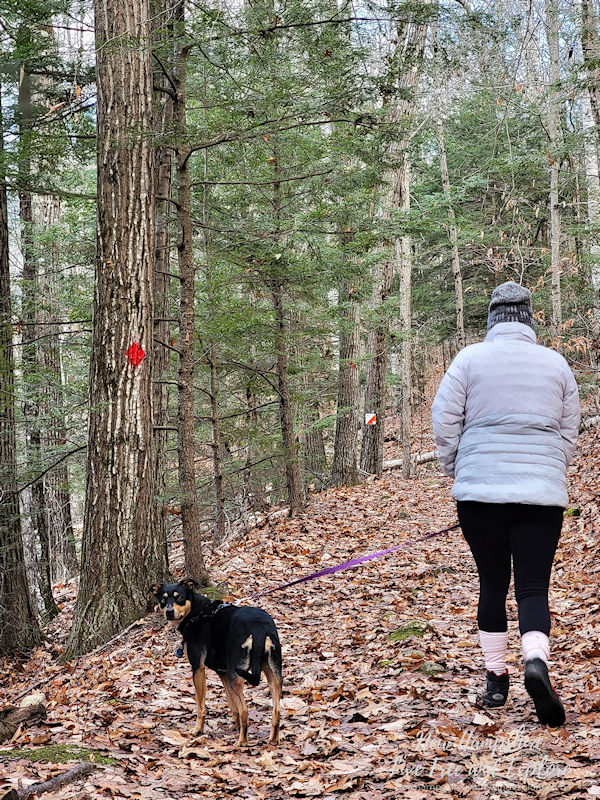 We spotted this birch tree which appeared to have been visited by a Pileated Woodpecker was our guess. If you have never heard one working on a tree, they are pretty impressive, as the picture suggests. 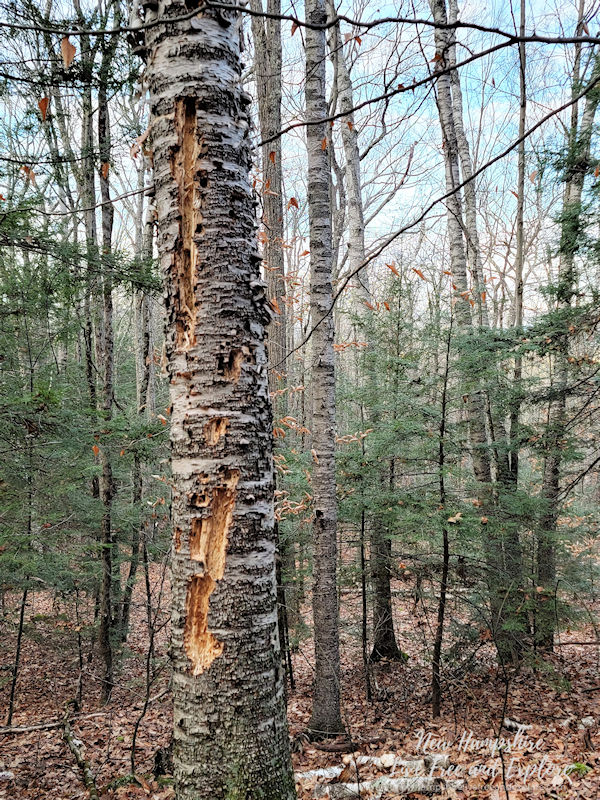 It wasn’t long and we had views of Keene and the surrounding mountains. Mount Monadnock was also visible. I remember the hike with my Geology class years before, which took us to the “Black Lead Mine” marked in yellow on the map. If my memory serves me correctly, I am pretty sure that offers even clearer views of both Keene and Mount Monadnock. It is obvious why the region is called “The Monadnock Region” as Mount Monadnock is its most visible landmark with views and vantage points throughout the area. 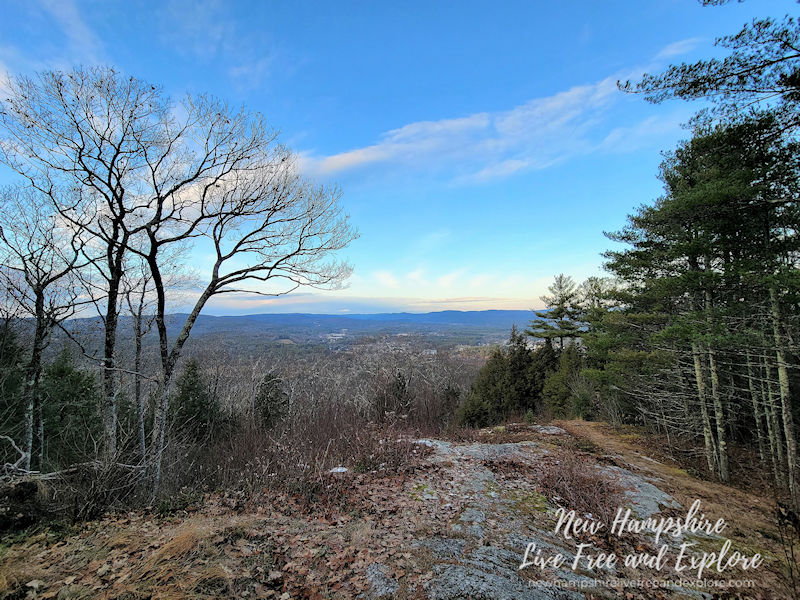 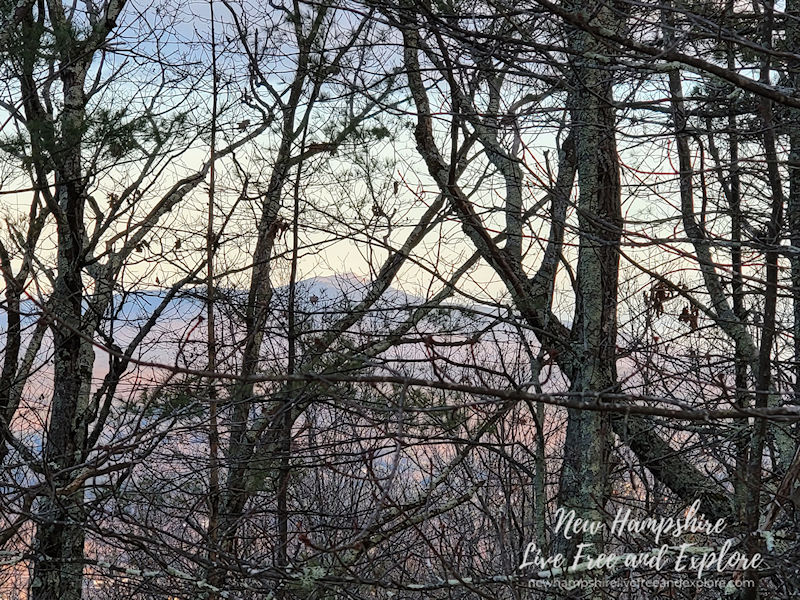 This set of bed frames was an unexpected find out in the middle of the woods! They appear to be remnants from Grandfather Colony’s “Tip Top House” referenced in the plaque posted on Horatio Colony II’s cabin below. 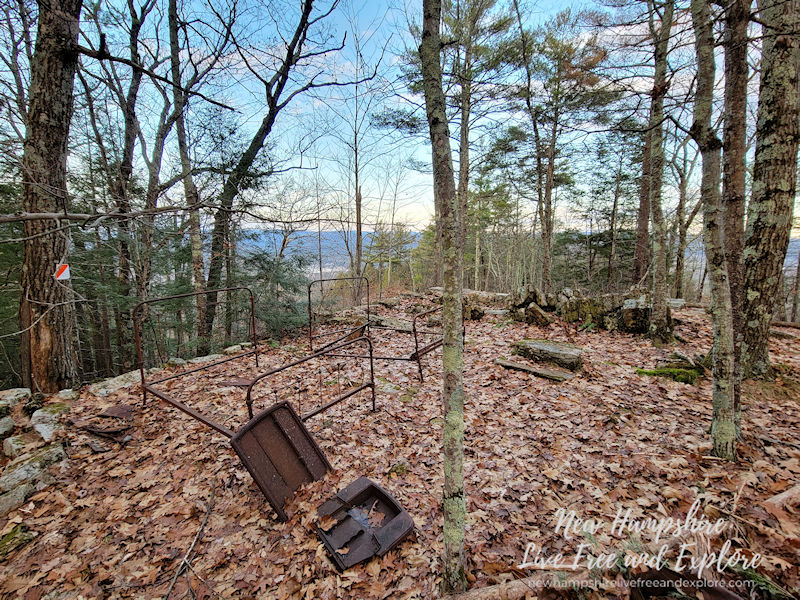 The “Red Diamond” trail proved to be a good choice as the sun began to set on our loop around the backside of the ridge. The Horatio Colony Preserve is one of the gems of the area and we can be thankful that families like the Colony Family have taken steps to set aside land for the enjoyment of future generations. 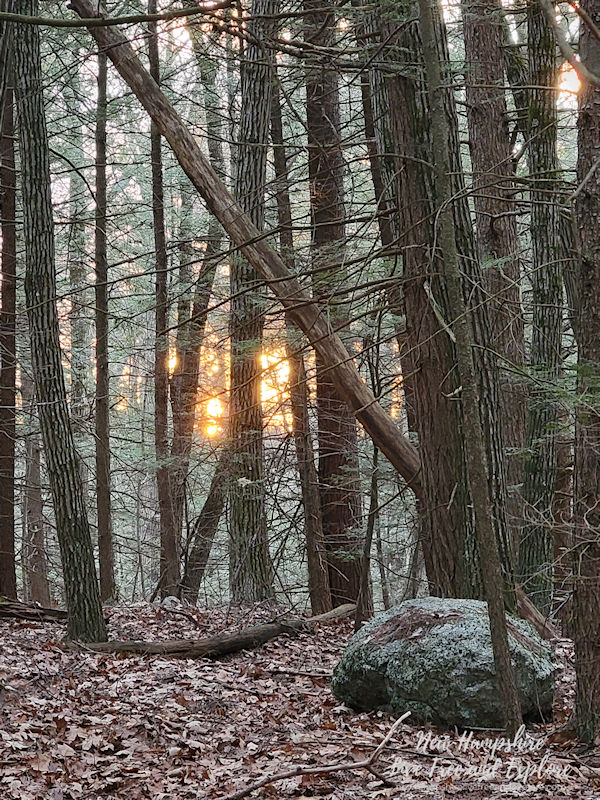